IN GRATEFUL MEMORY of THE LATE GEORGE HENRY & ANNIE STARCK 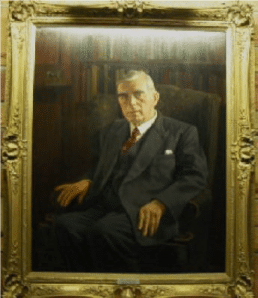 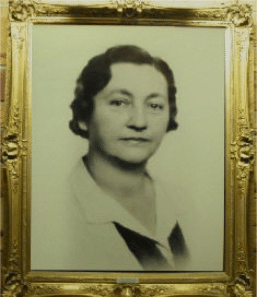 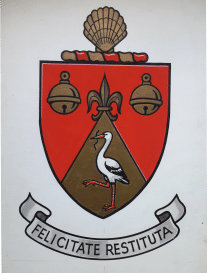 It is known that George Henry Starck came from a fairly humble background, and was born in the east end of London in 1882. It is said that the family business or trade was concerned with making wooden musical instruments, but that was not of great consequence and George Starck obviously realized that it offered few prospects for him. In 1902 – a couple of years after the ending of the Boer War, he emigrated to South Africa, and was to live the whole of the rest of his life here and contribute greatly to the country’s development and success. When he landed in Cape Town, however, the country was in the middle of a deep and serious depression following the end of the Boer War and he, personally, was probably as near to being penniless as didn’t matter. He tried to make a living by producing odd items of furniture during the week in his workshop, and wheeling them down to the Parade on a Saturday morning to try to find a buyer, but with very mixed success, partly due to the very depressed conditions. He undoubtedly found the going very hard indeed during those early years, and it is said, and I believe it to be true, that through lack of money he was often obliged to live in his workshop and to sleep under his workbench at night. In a rare reminiscence to his family, which I heard him repeat later, he described how he finally reached the end of his tether and decided that there was no alternative but to return to England, but how he changed his mind at the last moment when he walked on to Newlands station early one morning and saw, on a newspaper poster, that the government had decided, as a first sign of the end of the depression, that it was to take on a hundred new employees and build new homes for them. He said to himself “that must mean at least 100 new tables and 100 new beds – I am not turning my back on that, I am staying!” And stay he did! That Dick Whittington like decision was possibly the most momentous one of his life. Some years after that he took on a business partner. But that was not a success, and he was then faced with the problem of finding the money to buy him out. There seemed to be no solution, until one day a fairy godfather appeared – a Frank Claribut, who had come to know and like George Starck, and made him a cash loan without security or strings. The partner was bought out, the loan was quickly repaid in full, and the darkest days were over. In 1911 he formed his own company, G H Starck Ltd, which was destined to grow into the largest furniture manufacturing company in South Africa, and arguably the largest in the Southern Hemisphere. By the outbreak of the Great War, he had made steady progress and acquired factory premises in The Gardens, in Cape Town, including an adjoining house called Willow Lodge, in which he was living when he married Annie Oram in 1914. Now the Oram family had also immigrated from England, from Maryport in Cumberland,  a few years before George Starck’s arrival, while the Boer War was still in progress.  Annie Oram’s father had become seriously ill with tuberculosis and been advised to find a warmer and drier climate if he wanted to recover.

The family consisted of father, mother and baby Annie. Later 3 sons were born; Percy, who spent most his life working for G H Starck Ltd, Cecil, named after Cecil John Rhodes, who died at the age of 17, and Teddy, who died as a baby. They, too, had very little money, and one can only imagine their privations and courage in making the long sea voyage, probably travelling steerage, and arriving in Cape Town with no friends or prospects. Mr Oram eventually found work with South African Railways and was sent to De Aar. By this time, G H Starck Ltd was starting to take off and to leave many of its competitors behind. At this stage, it might be appropriate for me to tell you something about the personalities and characters of George and Annie Starck. You will have realised, and you can see from the excellent portrait of him hanging in the lounge, that George Starck was a man of very strong character and an unconquerable will to succeed. He had not had the benefit of a good education and was not a particularly skilled craftsman but had made his mind up to earn a living by making furniture, and to reach the top of the industry. One of his great skills was in finding men of ability to work for him. He was deeply religious and a devout churchgoer, and he expected his family to have the same standards. His ethical standards in business were beyond reproach, and he earned the respect of friend and foe alike. Annie, his wife, shared his high moral standards and was as true as steel to her family and friends, but with a much softer nature and a heart worn firmly on her sleeve. She valued her friends greatly and treated them with great warmth and compassion. She had a fine sense of humour, at times a very necessary quality in dealing with her dominant husband, to whom she was a wonderful consort. During the years between the wars both George Starck and his business developed greatly in status and success. Competition in the furniture industry was fierce, and one of his great qualities was his realisation of the need to keep ahead in manufacturing techniques, including raw materials, plant and machinery. He boasted that every year for twenty years between the wars, he travelled abroad in search of new developments, and undoubtedly this paid huge dividends. In the early 1930’s, he decided that Wesley Street was becoming too small and he bought a farm of several hundred acres at Elsies River and started building a new factory there. When completed, this comprised some 25 acres of covered floor space – easily the largest of its kind in South Africa, and arguably in the Southern Hemisphere at the time. While all this was happening his reputation as an industrialist and businessman was spreading, and he was invited to take on a number of important directorships, and other honorary appointments, including the Chairmanship of the Cape Town Technical College and as a major sponsor of the YMCA. The family home was moved once more from Rondebosch to Lidcote in Kenilworth, and it was round about that period that he acquired the Fairview and Oosterzee farms at Bellville, where these homes are established. The names of the various cottages here at Bellville have been chosen to commemorate the life of the Starck family. On the outbreak of war in 1939, General Smuts quickly recognized his abilities when he became Prime Minister, and in January 1940 he was summoned to Pretoria by the General, who invited him to join his administration as a full-time official in helping to harness the country’s industry to the war effort.

He immediately agreed to do so, but on condition that the appointment would be entirely unpaid. He left his own considerable business to be run by his staff for the duration of the war and moved to Johannesburg to service his country of adoption as a Deputy Director of War Supplies for no reward, except the satisfaction of doing his duty. On his return to Cape Town from Johannesburg in 1945, in characteristic fashion, he wasted no time in resuming firm and undisputed management control of his company, which he firmly held on to until, in the early fifties, he sadly became afflicted with an incurable illness, which steadily sapped away his strength and ability. Before that occurred, however, he entered into what was undoubtedly the most prestigious period of his life, during which much honour was shown to him. He became a director of many important companies including The Industrial Development Corporation, The South African Marine Corporation, The Union Platinum Co., Plywoods Ltd, and Stuttafords, to mention some of them. He was elected a member of the Council of the University of Cape Town and played a leading part in many charities including The Ladies’ Christian Home and the YMCA. Shortly before his death, he was awarded the Gold Order of the Red Triangle, the highest tribute that the YMCA can pay. One of his greatest personal ambitions was to build his own house, and he resolved to do that on his Bellville farms. The wonderful woodwork including the windows, doors, panelling, as well as the furniture, that are around you were designed and made in his own factory by his own craftsmen. The stone fireplace in the lounge, comprising 365 stone shoddies, was made at Rochester Brickworks, of which he was Chairman, from Table Mountain stone that was quarried there. By the time it was completed George Starck had become a sick man, but he was spared to enjoy it for a year or so before he passed away in 1958. Annie Starck, his widow, who had lovingly nursed him through his long illness, sadly died at sea within a year on a Union Castle ship while returning from England to South Africa. The matter of the disposal of his considerable fortune on his death was one to which Mr Starck gave much thought during the later years of his life. He was, above all, anxious to repay South Africa for its acceptance of him as one of its citizens, and for the opportunities to succeed that it had offered to him, and which he so ably grasped to the ultimate great benefit of the country as well as himself. He chose the George and Annie Starck complex, including the Annie Starck Village and the G H Starck Centre, as the means of doing this and, although his scheme was little more than a germ in his mind when he made his Will, and the instructions that he left were necessary of a general nature only, I believe that he would be very satisfied with the way that it has taken shape if he could be with us to see it all today. Source: AN ADDRESS GIVEN BY P V COLLINGS AT OOSTERZEE ON 17 FEBRUARY 1992

Extract from a letter written by Mrs Darryl Hall, who lives in Cumberland in the U.K. Mr George Starck was her great-uncle. “Mr Collings was right in supposing that George Starck was one of seven children. The others were Emily, Mabel (my grandmother), Walter, Florence, Albert and Ivy. His parents were Walter Starck (1856-1923) and Emily née Steel. Walter was a flute-maker, as indeed the family had been for generations back, and I believe the last one to make flutes only retired fairly recently (he was a pretty distant relation though). I was fascinated to read that Annie Starck came from Maryport, which is only about sixteen miles from here.” 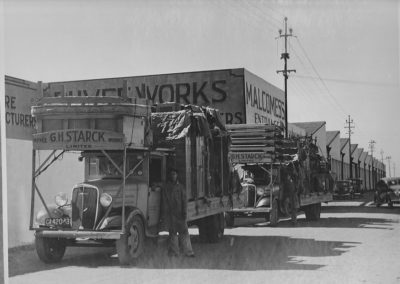 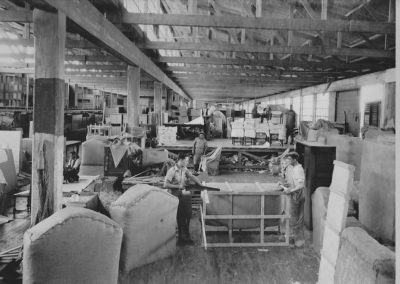 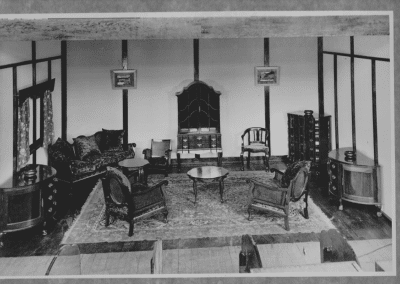 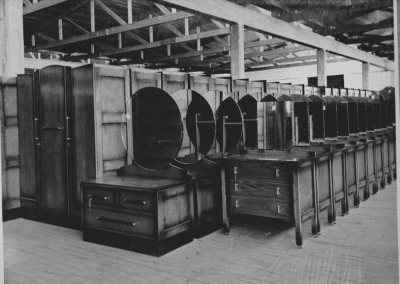 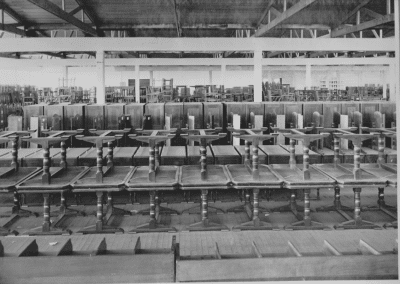 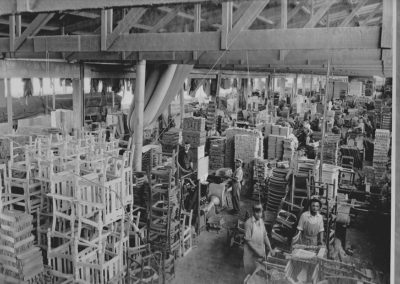 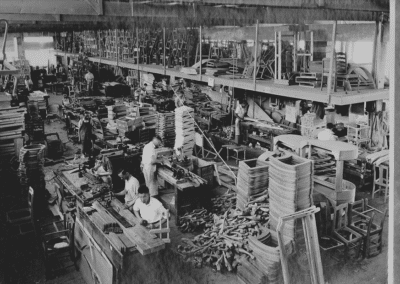 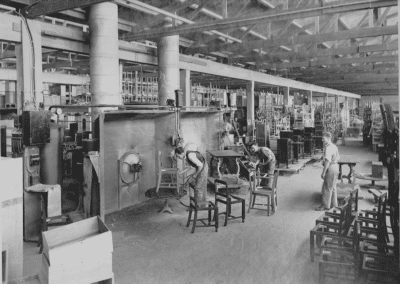 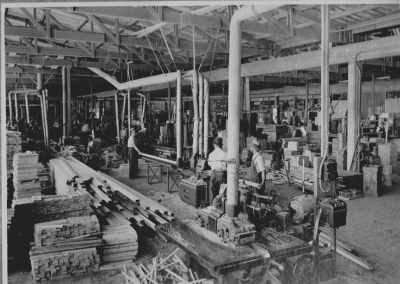 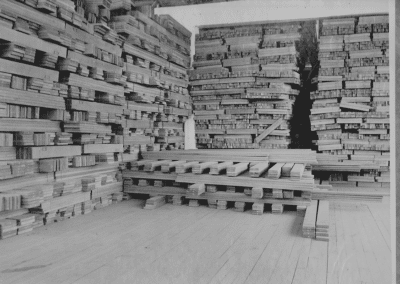 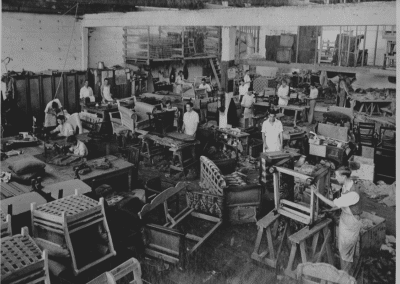 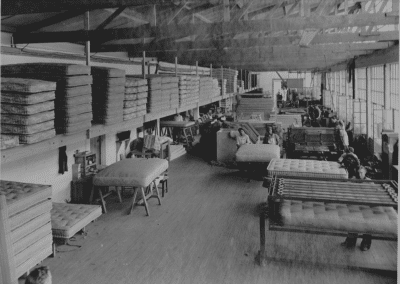